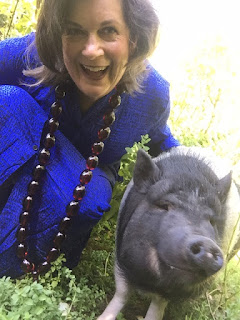 You know that I am enamored of this little piggly wiggly. He has stolen my heart. I have never met him, I am just content to love him from afar. I have wondered if I have anthromorphized his traits. But, I really don't believe it to be true. As lady Gaga would say, " he was born this way".

Yes, he reads La Contessa's Instagram posts and all the comments. He texts at will and is interested in good design across all periods. I don't know if he arrived with good taste or if it was a skill honed from learning from the very talented, La Contessa. All I know is that he has "IT" when it comes to having a great design sense.

Take for instance, his desperate need for his very own Fortuny pillow. How wonderful is it that a little beastie boy knows about the splendors of Fortuny. Not even some people know! Well, his very own custom pillow is in the works and will be waiting for him under his Christmas tree, a gift from his east coast friend.

Why El Narratore, you might ask? Well, I had sent La Contessa a photo of a terra cotta pig that I had just purchased. And ,  Banksy , of course, saw the photo of the pig! And, he "facetimed" to tell me a story all about this particular pig.

Facetime. Something on my phone that I NEVER use. No one will see me before I have my face on for the day! So, imagine my surprise when late at night, East Coast Time, my phone makes this odd bell sound. Someone is "Facetiming " me in the middle of the night! Groggily, I reach for the phone imagining all sorts of horrific things that could have happened!

At first, I can't make out what I am looking at. The view pans back a little . Squinting at the screen, I realize it is a SNOUT! What?? OMG, it's BANKSY!

What are you doing? How are you doing this? Why are you calling me? Is this possible? Am I dreaming? Is this an anthropomorphized cauchemare?

Relax, the piggly wiggly says in this very posh Eton-schooled-sort-of voice. What? An English pig? "No", he tells me that this is just his telephone voice. He said he had to learn it so that people on the phone would take him seriously. WHAT? He said that he realized early on that his little squeally little pig voice did not gain him respect when he wanted to have a serious conversation.

Rolling my eyes, I asked him how he learned this voice...did he have a voice coach ... Well, rolling his eyes right back at me, he informs me that he loved watching "Brideshead Revisited" and picked up all he needed binge watching it late at night. OH, PLEASE!

Groan, this pig and his shenanigans are not to be believed! How is he able to use an iphone? Nonchalantly, he explains that he uses a stylus held in his little piggy lips to type on the keyboard. NO PROBLEM, he says.

After more eye rolling on my part,  I ask why he is calling me. He says he saw the photo of the terra cotta pig that I showed La Contessa and he felt that is should be returned to its rightful owner.

I have no idea what he is talking about but he says he has a story to tell me that explains it all. Furthermore, it is proof positive that this terra cotta sculpture should be returned to a member of the family. GOD,WHAT IS HE TALKING ABOUT?

He asks me if I have read all about the big art heist at the Isabella Stewart Gardner Museum in Boston and all the fabulous art that, to this day, is still missing. Of course, everyone knows about it, I respond. Well, mention of some of the stolen items was "held back" by the police, he said. He tells me that the police don't release all the information about crimes so that if they find a culprit, they can use the information to help trap a criminal. WHAT? How do you know that, I ask.  Netfix, he says....I watch a lot of cop shows late at night. Oh, good grief...my eyes rolling yet again!

So, his story begins. His great, great, great ,great grandfather was a famous figure in history. He was a great orator, a philanthropist, a philosopher, a political savant and a great all round character. He was famous for his collection of Italian sculpture. He even had a Bernini sculpture that had been done of one of his ancestors. This collection was world known and all the important museums were hoping they would be the recipient of his largesse when he died. But, when he passed away, it was given to the Elizabeth Stewart Garner Museum with a sufficient endowment to keep the collection intact for perpetuity.

As I am listening to this unbelievable fiction of Banksy's, I realize that he has been listening in on La Contessa's phone calls to me where she discusses her ancestor, General Nathanael Greene and his home in Newport....a truly important historical personage. Banksy apparently had decided that if La Contessa had a significant personage in her genealogy, that he wanted one, too! THIS PIG IS TOO MUCH!! REALLY!

He told me that he doesn't care how I came to own his family treasure. He knows, that by reputation, I am an upstanding citizen and will do what is proper and return the item to him. He wishes to savour its great beauty for a short time and then, with great fanfare, return it to the Isabella Stewart Gardner Museum!!

I , rolling my eyes, tell Banksy that this story is a total fabrication and he should be ashamed of himself for making up such nonsense. Never mind calling me in the middle of the night...

I tell him that the little terra cotta big is not an antique, that it is fairly new, not a museum item in any way, shape or form.

Oh, I know , he says. but, it is awfully cute and kind of looks like me and would look nice in La Contessa's garden. And he says he  thought if he told me a great, fantastic, magical story that I would think that he is such a very good little piggly wiggley that perhaps maybe, cloven hooves crossed, I might send it along to him . At this point, he sends me a screen shot of his smiling little snout and his cute little wagging curly tail.

I tell him that I am ending this conversation Now and going back to bed. And he should, too! 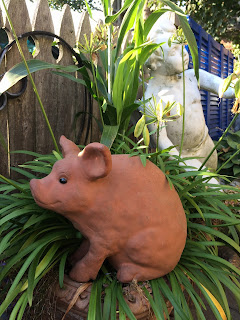 But, I couldn't sleep, thinking such happy thoughts of my West Coast funny little piggly wiggly. Up I got, got the bubble wrap, the box and the packing tape.

In the morning, safely packaged, Banksy's family treasure went on its way west.

WHO COULD RESIST THIS CLOVEN HOOFED CUTIE?